Improved relations between Russia and the West, especially the United States, has oil companies thinking again about whether to invest in Russia or in the case of companies already in Russia, whether they should increase their exposure.

As of yet, however, new allocations have not been announced. Production- sharing agreement (PSA) legislation, which is still mired in bureaucracy, and certain companies’ disregard for shareholders rights will keep investors watching carefully on the sidelines.

Major oil companies have been involved in Russia, particularly since the collapse of the Soviet Union in 1991. Significant developments in the Russian oil sector took place in 1992. As Alexander Stepanko, a senior oil analyst at Rye, Man, Gor Securities (RMG), noted: “In 1992, the Russian Federation transferred almost all the licenses for production at existing oil fields among existing state- owned oil companies. Afterward, in 1994, during voucher privatization and the notorious loan-for-share auctions, mostly Russian management of existing oil companies or newly born financial groups acquired the equity stakes in these cash-flow generating companies. Foreigners were kept away from those auctions, and also, they were not willing to take part on a significant scale in foreign direct investment at that time.” 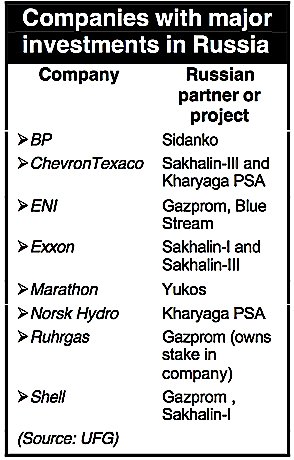 While international oil companies continue to investigate opportunities in Russia, new investments have not been forthcoming. Stephen O’Sullivan, head of research at United Financial Group (UFG), said he is “not aware of new allocations being announced for Russia/CIS as such.” He thinks, however, that “the general tone of management thinking has improved over time, principally because of [President Vladimir] Putin’s initiatives. That’s not to say that everyone is about to pour money in here. “ Unfortunately, disregard for shareholders’ rights is still a matter of concern for some, and PSA legislation remains mired in bureaucracy. “Most companies take that as a litmus test,” O’ Sullivan remarked.

In other words, ongoing legal issues such as PSAs remain on management’s collective mind. But there may be some oil company managers who are willing to take a chance. According to O’Sullivan, “there are signs that companies might be willing to consider making investments on the basis of the existing legal and fiscal framework, which would be quite a departure from the rhetoric up until now. I just sense that there is some willingness to move on the part of some of the companies looking at opportunities in Russia.”

Part of the reason some companies maybe willing to look at Russia again is because of disappointment with opportunities in the Caspian. O’Sullivan explained: “The Caspian has sometimes proved a disappointment, but I suspect that may have been more the result of overinflated expectations in the first place.”

He added that he believed interest in the area had been sparked by concern about Russia. “[Although] Russia had reserves, etc., it also had political instability, legal uncertainty and a bad history. I think that’s changing now with Putin in charge as people take Russia more seriously. There are lots of obstacles to be overcome, such as the absence of PSA [legislation], the position of Transneft, domestic crude prices (which have slumped in the last few months) but I sense that companies are more willing to look at Russia as a normalizing country. There are those who say that they underestimated the time it would take for Russia to make the transition and that’s a fair comment, but then we might also say that we shouldn’t expect Russia to be forever in transition and to never begin to normalize. Putin might be the catalyst for the normalization process.”

Legal and economic reform will continue to be a challenge for international oil companies — and also for Russian oil companies. As O’Sullivan explained: “Of course, Russian oil companies are not going to be too happy with well-capitalized Western companies wandering around looking for assets in Russia. There is already considerable competition for assets in Russia and elsewhere in the CIS between the Russian companies. That’s one of the reasons why PSA progress is slow. Western companies might (and indeed do) get access to offshore projects which are very expensive and difficult to develop and therefore of less interest to Russian companies.”