Electricidade de Portugal (EDP) has gone from being a small and almost unknown energy group to a significant European player with international ambitions. Mayra Rodriguez Valladares examines the company’s background and its strategic and financial outlook.

As the Portuguese economy has grown, not surprisingly, so has its electricity demand. Electricity demand in Portugal is growing roughly in line with Portuguese GDP at about 3.4% annually, much higher than the EU average of about 2.7%.

The country has gone from having about 7,324 megawatts (MW) of installed capacity in 1993 to about 7,860MW — a rise of approximately 7.2% in six years. The majority of capacity is hydroelectric, followed by thermal. The country’s energy policy is focused on diversification. By developing renewable sources, it has introduced more competition among the various energy sub-sectors. With the arrival of natural gas in Portugal in 1997, the electricity sector has begun to rely less on oil and coal.

In July 1995 the government instituted laws redefining the structure of the Portuguese electricity sector. The 1995 regulatory framework created the SEN (Sistema Electrico Nacional), which serves to improve transparency in the costs related to electricity distribution and to prepare for a liberalised and competitive electricity supply system. The SEN is now based on two systems: a binding one based on the idea of public service, known as SEP (Sistema Electrico Publico); and an independent system, SEI (Sistema Electrico Independente). The 1995 laws were amended in 1997 in line with European Directive 96/92/CE.

In 1976, when key Portuguese power companies were nationalised, Electricidade de Portugal (EDP) was created. The company’s main goals were to have an integrated distribution throughout the municipalities and to improve the grid; to continue increasing the use of electricity in Portugal; and to establish a single tariff throughout the country.

EdP was a near monopoly in generation, transmission, and distribution until its privatisation in June 1997. It remains the largest provider of electricity in Portugal but it does have competitors, the number of which is expected to rise as Europe continues to liberalise its energy markets. EdP’s major competitors are Portugal Telecom, Union Electrica Fenosa and Endesa. Also, Portugal’s Sonae Group wants to compete with EdP in the energy sector in Portugal within the next two years. Sonae is looking to form a strategic alliance with a Spanish energy company through its energy subsidiary Ecociclo Energia e Ambiente. It will also look to buy energy from Spain before forming an alliance.

In EdP’s initial public offering (IPO) in June 1997, some 200,000 investors were targeted, representing a substantial increase over the levels of around 90,000 in some previous Portuguese offerings. EdP’s sale was a significant component of the government’s privatisation plan. At present, the government retains a majority interest in EdP, while 48% of the company has been sold to investors.

Despite the company’s privatisation, EdP continues to dominate the Portuguese electricity sector. Its installed capacity represents about 92% of total Portuguese capacity and it generates about 85% of Portugal’s electricity and distributes 100%. EdP generates power from hydroelectric, fuel-oil, coal-fired, and wind-driven facilities. The company has been increasing its hydro capacity, particularly during 1992 to 1997. With more than 3,900MW of hydro installed capacity, on an average year hydroelectric production has been 11,700GWh; in a particularly rainy year, that figure has reached 15,000GWh, and in a very dry year, the figure has fallen to 7,000GWh. Thermal capacity is more than 3,500MW, and the installed capacity per generating unit is between 16.3MW and 314MW. Unlike countries that have very heavy industry, the majority of EdP’s customer usage is in the low voltage area.

In addition to its electricity activities, EdP has formed a consortium to operate a telecommunications network in preparation for the opening up of the Portuguese telecoms market. In October, EdP officials announced that they expect a new full service telecommunications unit called Oni to break even by 2004.

EdP chief executive Mario Cristina de Sousa said at a news conference that the company’s goal is “to create quality service for our clients and value for our shareholders”. EdP said it plans to invest some Esc100bn through to 2008 on developing fixed-line voice and data services.

EdP’s management continues to emphasise that its strategy is to build on its core business of electricity, generation and distribution in Portugal. Given the electricity demand that both Portuguese and international energy authorities predict — rises of an annual average of about 3.4% — EdP will remain focused on being a service-oriented business, unlike before it was privatised — when it was primarily focused on technical aspects of the industry, according to Antonio Pacheco de Castro, EdP investor relations officer.

To improve its services, EdP is working on increasing capacity and increasing its use of gas. The company is building a combined-cycle power station in Carregado on land attached to its existing complex. The gas-powered facility will need investment of more than Esc100bn and will be the second plant of its type in Portugal after Tapada do Outeiro, which is owned by private group Turbogas, an affiliate of PowerGen of the UK.

In addition to fulfilling local demand, EdP is also very interested in foreign investment forays, particularly in Brazil — where historic and linguistic ties are a natural fit for further business expansion. EdP has a 92.2% stake in Rio de Janeiro utility company CERJ. Moreover, EdP is joining with UK utility Thames Water to bid on water and wastewater projects in Brazil, Chile, and Portugal.

In 1999, the company posted first-half profits of Esc49.97bn (US$263m), down from Esc62.39bn in the same period of 1998. Analysts and traders had been expecting these results and attributed them mainly to factors beyond the company’s control: lower rainfall, which boosted costs because of the need to use more solid fuel; price cuts dictated by the country’s independent tariff body; and losses from its Brazilian investments.

The impact of the fall in tariffs was offset to some extent by a 7% rise in consumption, while there was also some improvement in the level of operational efficiency, analysts added. Lack of rain meant the company spent some Esc10bn more on fuel purchases in the period compared with 1998. Analysts noted that Brazilian concerns Bandeirante and CERJ, in which EdP holds 16.7% and 21% stakes respectively, performed relatively well but produced a loss for the Portuguese company because of the currency factor. EdP lost Esc3.7bn on its stake in Bandeirante and Esc1.8bn on its holding in CERJ.

Despite the slide in profits, and with investors deciding all the bad news had been priced in, on the day of the announcement EdP shares rose 0.5% to E15.60, moving against the slightly weaker trend of the PSI20 index, which ended down 0.13%.

In September 1999, Standard & Poor’s assigned its AA long-term and A1+ short-term ratings to the E2bn medium-term note programme issued by EdP and EdP Finance BV. S&P also assigned its AA long-term rating to the E750m notes maturing 2009 that were issued under the programme. According to an S&P spokesperson: “The ratings on EdP reflect its strong business profile as the dominant vertically integrated electricity utility in the Republic of Portugal; its monopoly transmission and distribution business; and a strong service territory.”

Effective January 1 1999, the regulator imposed a 6.4% reduction in average final tariffs, which was more severe than expected by EdP. Nonetheless, S&P officials also stated that “the group’s financial position is strong and cashflows are expected to remain stable. EdP hopes to mitigate the impact of lower revenues with further cost reductions achieved primarily through the merger of its four distributors.” These strengths, however, could be threatened by uncertainties associated with the recently created regulatory regime; the next regulatory review starting in 2002; and modest diversification in less creditworthy countries (primarily in Latin America).

S&P has stated that while there is uncertainty regarding the next regulatory review, it expects less harsh action by the regulator now that tariffs are in line with EU averages. In addition, the company’s serious cost-cutting programme has been noted by the market. The company is adamant that it will recoup most, if not all, the first-half losses in the second half of this year. Most analysts expect a rise in the company’s operating margin from 32% in 1996 to 39% by 2001. Free cashflow is also expected to more than double in the same period.

In October and November this year, EdP’s share price declined dramatically to the point at which it was privatised two years ago. The latest worry to weigh on the stock is uncertainty over whether electricity tariffs will be cut further next year, which could hurt the company’s income. The latest sell-off was triggered by state regulator ERSE conceding tariffs might be “adjusted” next year, when the market had been counting on no further changes before 2001.

When ERSE announced an average 6.4% cut for 1999, it indicated that there would be no further changes next year. Analysts said any cut for next year would be of 2% at the most. One analyst said: “The big fall in EdP is panic by small investors at a moment in which foreigners are avoiding all European electricity companies.”

Analysts said the stock’s decline had more than discounted any such adverse developments, leaving plenty of upside for the market heavyweight that was once regarded by small investors as a safe haven. Most stock analysts believe this decline is unjustified and offers a strong buying opportunity.
 [GRAPH OMITTED] 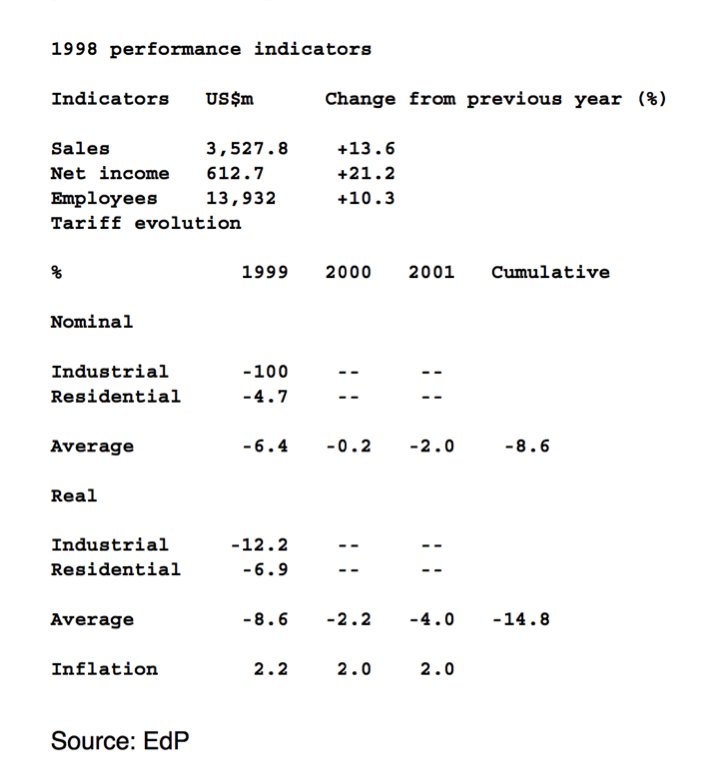