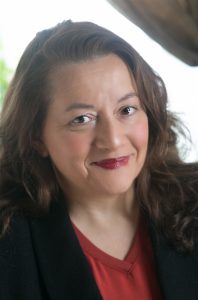 She was born in South Bend, Indiana and raised in McAllen, Texas. Rodríguez Valladares began her career with the Federal Reserve Bank of New York where she was a foreign exchange analyst. During her time at the New York Fed, she had the honor of interpreting for Dr. Henry Kissinger and Mr. Paul Volcker during a visit to the Bank by the Former Russian President Mr. Boris Yeltsin. Subsequently, she was a junior investment banker and later an emerging markets fixed income and equity strategist with JP Morgan in New York and London. In 1997, she joined BTAlex.Brown as a Senior Russian Equity Analyst, where she analyzed Russian oil and electricity companies, along with macro political and economic events in that country.

Rodríguez Valladares graduated from Harvard and Radcliffe Colleges in 1988 with an AB in Russian and Soviet Studies. Her magna cum laude thesis on the Berlin Blockade received a Best Thesis Award in the Slavic Languages and Literatures Department. During her studies she was awarded eight academic and travel fellowships. In 1989-90, she was a Raoul Wallenberg Scholar at Hebrew University in Jerusalem, where she studied the Hebrew language and about the Middle East conflict. She had the honor of leading a team of Christian, Jewish, and Druze students in conducting the first student-run human rights conference in Moscow in June 1990 and of presenting the Raoul Wallenberg Human Rights Award to Dr. Yelena Bonner.

She graduated from The Wharton School and The Lauder Institute of the University of Pennsylvania with an MBA in Emerging Markets Business and an MA in International Studies in 1995.  She was awarded a United States Foreign Languages and Arts Fellowship. She was also accepted to the Wharton-Recanati program, where she worked with a leading Israeli company developing, designing, and selling cookware for disabled and elderly people. Rodríguez Valladares has also completed study programs in art, language, literature, and politics in Berlin, Jerusalem, New York, St. Petersburg, and Moscow.  She is fluent in English, Russian, and Spanish and proficient in German, Hebrew and Italian.